I have to be honest with you, I still remember my parents’ Dual turntable and the fun experienced while listening to the fairy tales from the Efteling, a Dutch theme park, and later on Jeff Wayne’s musical version of the war of the worlds. The turntable is long gone; the CD collection is tucked away and made room for the path of comfort. In my effort to bridge the gap between convenience and quality I ended up with a streamer from Linn. I bumped into an owner of a Linn Klimax DSM streamer, who just got the full upgrade treatment and got his old Klimax DS/1 back in a black “Renew DS” box. I call it reference quality on a budget. It was not a difficult purchase decision.

So, when I got the question: “Would you like to review a vinyl turntable” I was reluctant to accept at first, but intrigued by what I could bring to the table, pun intended. Would it take me back to my youth? How would it compare to my streamer I hold in high esteem? I just had to know. Off I went to Joenit, distributor for Rega Research in the Benelux countries. The Rega RP10 with pre-fitted Aphelion moving coil cartridge, along with the separate IOS reference phone stage, was sitting in their cardboard boxes ready for transport. 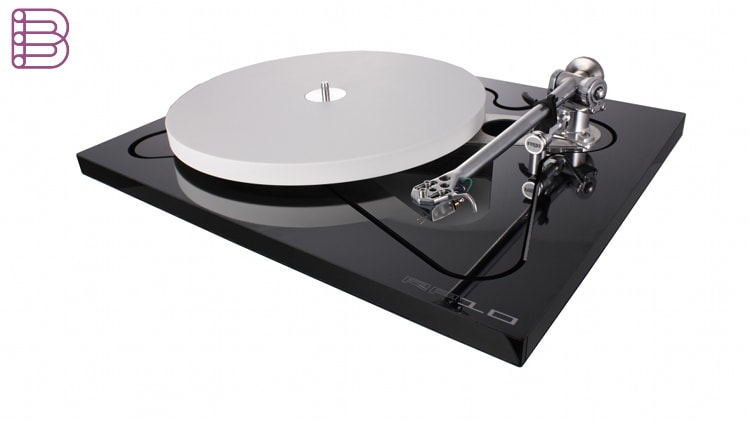 Back home I marveled at the extraordinary design of the polished aluminum surface of the tonearm, the impressive looking skeletal plinth design and the white ceramic platter. It’s a real pleasure for the eye. It got me excited and filled with anticipation. The installation procedure was fairly straightforward: overhang, cartridge tracking and anti-skate only took a few minutes to set up. However if you want to squeeze the last ounce of performance out of your new investment make sure your dealer does it properly. It can make all the difference.

Virtual teardown of the turntable

Let’s start with a brief summary of the key components of the provided test equipment and the underlying design philosophy.

First of all there is the skeletal plinth design with polyolefin foam core, which is very light and extremely stiff and rigid. Just to make a statement Sam from Joenit handed to me part of a plinth and challenged me to break it. Challenge accepted but failed. That was a great first impression.

Where did it begin? In the seventies Rega Research started with a structure comprised of two layers of phenolic resin with a lightweight particle or fiber board sandwiched between the skins. In fact the same material that was used in the world of aerospace and motor races. 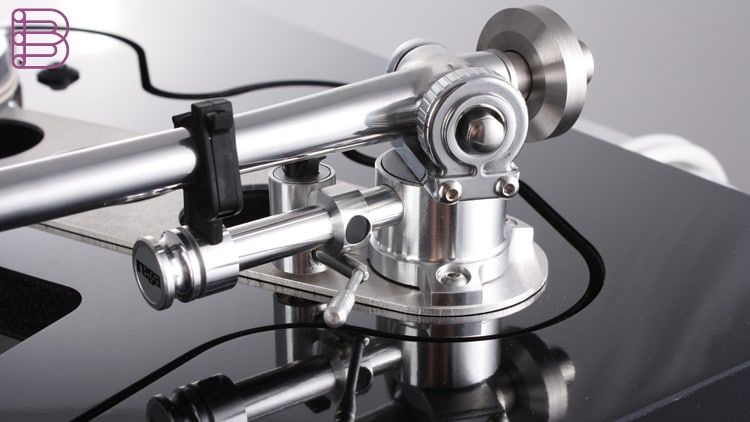 Combine this with a “dual beam bracing” system between the tonearm mounting and main hub bearing in the lightest and stiffest material available – magnesium and phenolic – and you have an overachiever to prevent energy absorption and unwanted resonances developed by the same turntable motor and main bearing. It even decreases the pickup of airborne vibrations. All this to avoid unnatural distortions added to the music.

Secondly there is the white flywheel effect ceramic platter on top of the main bearing. It’s produced from a ceramic oxide powder, which is compressed, fired and diamond cut to ensure perfect accuracy and flatness across the surface.

Contrary to the plinth it’s extremely heavy. Thanks to precision engineering, Rega was able to mill the platter in such a way it only takes a huge effort to start the rotation but eventually it generates its own momentum and minimizes the required power to keep the platter spinning, hence the flywheel effect.

To extend the lifetime of the motor you could always aid the initial rotation with a gentle push (A small piece of advice coming from the distributor).

As cherry on the pie, Rega also enclosed a white pure wool mat to provide maximum support for the records with minimum spring on the hard and flat platter.

The next key component is the custom external power supply, which provides the functionality of changing speed by the touch of a button, 33.3 RPM or 45 RPM. A new DSP control system, built upon a high stability crystal, generates a ‘near perfect’ sinusoidal waveform to drive the low noise motor at a constant selected speed. Factory set vibration and speed adjustments are then made to the power supply to tune the motor for optimal performance. Rega doesn’t leave a stone unturned to obtain the best possible result.

The last part of the turntable I’d like to go into further detail is the RB2000 tonearm, made from an aluminum alloy, with the Aphelion cartridge factory fitted. This is a thing of beauty. The entire tonearm structure is designed to have the minimum of mechanical joints whilst using the stiffest and most rigid materials in all critical areas with the purpose to redistribute mass and further reduce stresses and resonances. Each tonearm is meticulously hand built as an automated assembly line couldn’t handle the strict requirements. Another statement product.

The lift mechanism has an elegant look and a quality-assuring feel to it. Pulling down the handle dropped the needle gently onto the record groove. 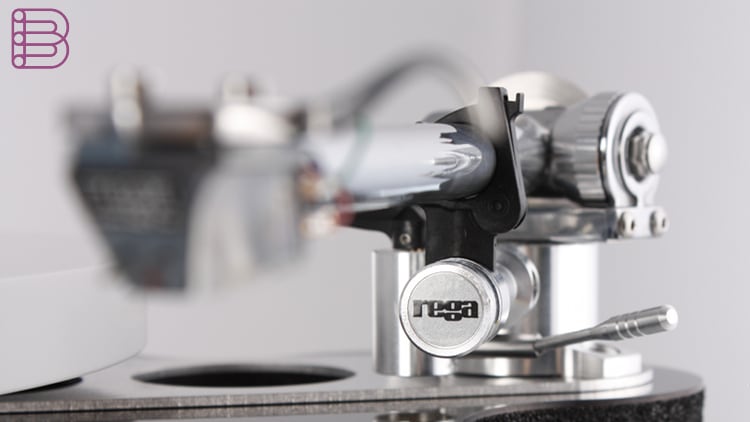 Speaking of needles, the Aphelion cartridge holds a real diamond, ingeniously mounted in a V shaped slot on the boron cantilever. The focus is again on stiffness to result in a higher level of detail retrieval originating from the record.

Before we could start with the listening sessions I had to connect the turntable to the Rega IOS MC Phono Stage. It’s a moving coil phono preamplifiers, using a high performance step-up transformer input stage with two separate Class-A amplifier sections to drive the high and low frequencies of the passive RIAA equalization stages and an analog output stage.
Heavy and dead quiet were my first thought. As I didn’t have another phono stage to compare it to, the individual benefice of this phono stage was excluded from this review. You can find some raving tests online.

Enough with the flirting, it was time to do some serious listening.

The first selection was Dire Straits’ album Brothers in Arms (Vertigo Records), which was their breakthrough album. It became one of the biggest selling albums of 1985 thanks to the title track, “Walk Of Life”, “Your Latest Trick”, and the song “Money For Nothing”. The pure emotional involvement the turntable induced with this LP was phenomenal. It portrayed the size and reach of instruments in a very realistic way, and with truly gorgeous tone color. The vocals had a touch of sensuality while maintaining a certain rawness to it. This all came together in such a cohesive and organic manner you could almost touch the performers.

The saxophone introduction to the song “Your Latest trick”, played by Michael Brecker, was simply put breathtaking. The purity of the tone gave me goosebumps from the very first note to the last one. I wasn’t prepared for that. 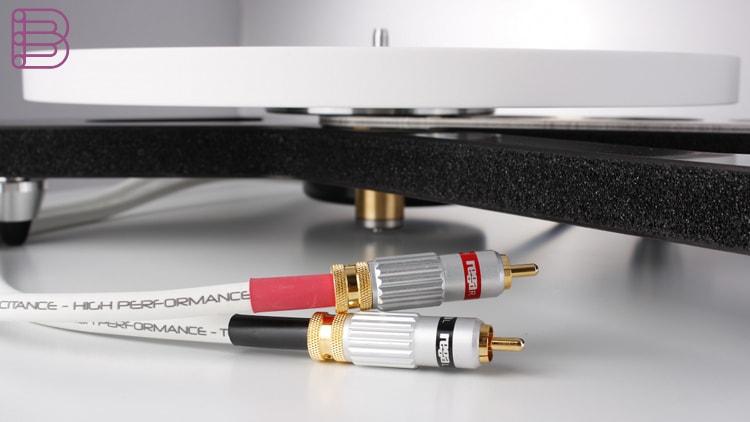 My second selection was Phil Collins’ album Face Value (Warner Communication Company), his first solo album that presents us a rare insight into Phil Collins’ life at the time, when he was headed for divorce.

The first track “In the Air Tonight” starts slowly full of hurt and ache. The RP10 turntable conveyed this intimacy with ease. After a few minutes the explosive entrance of the drums disturbs the relative calm. The sudden change in dynamics was handled with aplomb and although the visceral impact was formidable I never had the feeling it drew the attention away from the complete performance. Phil Collins’ voice was coming from right center and nicely separated from the drums that appeared to have been placed upstage center. The live performance was captured magnificently and felt very real with the aid of Rega’s turntable.

My next selection was Leonard Cohen’s album Song of Leonard Cohen (Columbia Broadcasting System), which is his debut album released in December 1967. The first track “Suzanne” is mainly built around an acoustic guitar and Cohen’s rich and at the time fragile voice. The performance was rendered so effortlessly it had a soothing and mesmerizing effect on me. The Rega combination, the RP10 with the Aphelion cartridge, all connected to the IOS phono amplifier seemed to infuse the recording with an extremely natural organic flow. The music was just there, to be appreciated for it.

My final selection was Billy Joel’s album Greatest Hits (Columbia Broadcasting System). The first track “Piano Man” is Billy Joel’s first major hit and the result of his stay in Los Angeles where he worked at the Executive Room bar as a piano player and listened to everyone’s regret, missed opportunities, and broken dreams. This song captured the real mood and essence of this place and time period exceptionally well. It started off with a jazzy piano solo and after a few seconds the harmonica wailed in. 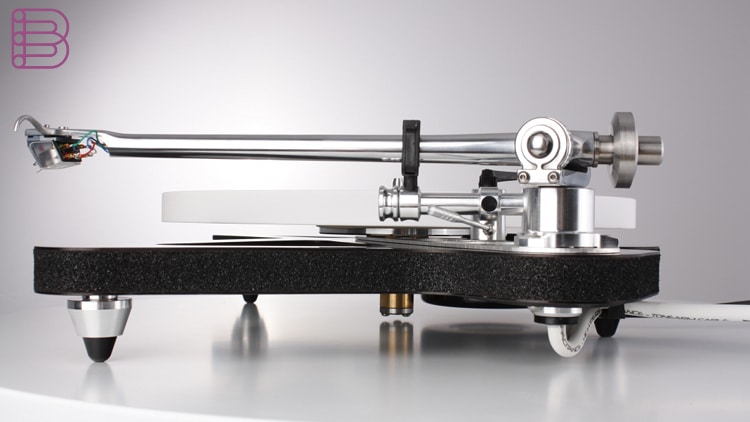 The piano was reproduced with such great authority and attack, while the energy, rawness, and spontaneity of the harmonica was retained impeccably, in such a manner I was fooled into thinking I was listening to real instruments. The turntable also succeeded in putting you through the paces of the repetitious melody without losing your attention at any point. It gave me the feeling I was sitting in the bar, having a drink and singing along with all the other guests.

Did I encounter anything the turntable can be faulted for during my listening sessions? Not really, apart from the fact that badly recorded albums still sound really bad: the soundstage collapses, the music can sound flat and dull. One could also state that the sound of the original recording is faithfully reproduced.

I compared the Rega combination with my resident Linn Klimax DS/1 renew streamer. First up was the eXtended Resolution CD of Brothers in Arms. What was immediately noticeable was a (more) smooth, detailed and refined representation, but it lacked the beautiful rich timbre and purity of the turntable. I was listening to a “clean” recording instead of participating the show. This was a first clear victory for the turntable.

So I evened out the playing field by switching to a remastered high-resolution album of Phil Collins, more in particular Face Value at 24bit/96Khz. This significantly closed the gap between both sources. Bass notes hit hard, some great dynamic shifts were propagated from the speakers. I was presented with a full sound and a lot of finesse. However the soundstage seemed to collapse quite a bit – could have been the purpose of the remaster? –, everything was happening dead center in front of me as opposed to the vinyl recording where I could be fooled into thinking that everyone and everything had his own place on the stage. 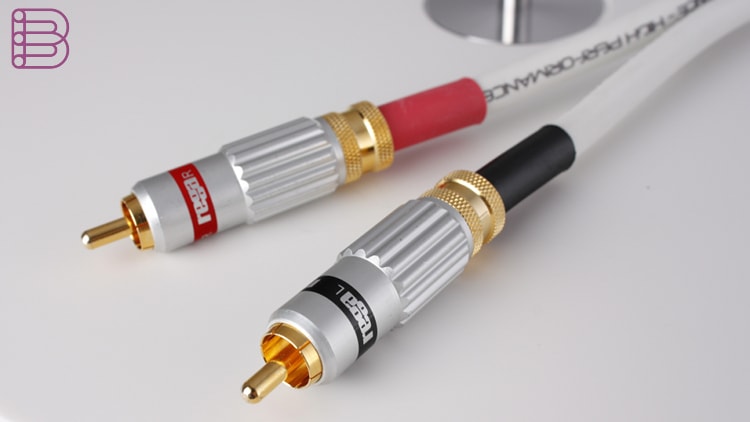 Apart from the soundstage, this was actually a close call. My nod still goes wholeheartedly to the Rega turntable, as the streamer didn’t have the same profound emotional impact as the turntable did and brought to you effortlessly.

Finishing with some less than good vinyl recordings and having compared it with some ripped CD’s or music streamed from Spotify. No contest there, but this time in favor of the streamer. The Linn “smoothness” made even poor recordings enjoyable to listen to. The turntable didn’t, but boy oh boy with a good recording it will take you places.

Rega RP-10 review
At this point, it’s no longer a secret that I was truly impressed by the presence of this turntable. It breathes life into high-quality vinyl records and takes you back to a place that puts a smile on your face. The table emanates music, and this in a most natural way with an uncanny fluidity, deep and saturated timbre, topped with some great dynamics.
Performance [60]95%
Features | Functionality [20]80%
Design | Build Quality [10]90%
Price | Performance [10]80%
Positive points
Negative points
2017-07-21
90%Overall Score